Imagine yourself and thousands of others experiencing the emergence of a new constellation over a unique island in the Hudson River. Every evening, as the sun goes down, starry lights emerge one by one with the stars of the night sky. Hovering around the perimeter of the Bannerman castle ruin, these lighted points refer to features of the structure still standing, as well as those details which no longer exist—creating a new constellation connecting past and present through this inspiring light-based public art project—bringing new energy to this majestic part of the Hudson River, and the Hudson Highlands State Park. Reaching further back into the past, Constellation references a belief of the Lenape, the indigenous / Native Americans of the area, of Opi Temakan, the “White Road” or “Milky Way” connecting our world with the next.

Constellation is a large–scale sculptural installation bringing together light and form, history and phenomenology. A series of 17 slender tapered aluminum poles are installed on the island at heights ranging from 40 to 80 feet tall, creating a visual vertical rhythm around the ruin, drawing the eye upward while accentuating ideas of absence versus presence. Small lights (solar powered LEDs) are installed on the top of each pole, giving the appearance of each light floating independently in the night sky. The work has many vantage points on both shores of the Hudson River, including commuter trains, nearby hiking trails, roadways, and boats.

Artist Melissa McGill, based in NY, is an interdisciplinary artist who creates ambitious, large-scale site-specific public art projects. She incorporates sculptural elements, light and sound to present experiential works that connect us to rich overlooked histories and traditions, while heightening awareness of our surroundings. She has been exhibiting her artwork nationally and internationally since 1991. Recent projects include Palmas, 2014, Manitoga, Garrison, New York ; The Campi, 2018, Venice, Italy, as well as solo exhibitions at Francesco Pantaleone Arte Contemporanea, Milan; White Cube, London; Power House, Memphis; Palazzo Capello, Venice; and CRG Gallery, New York. She is a graduate of The Rhode Island School of Design. For more about Melissa McGill's projects, please visit: www.melissamcgillartist.com

What is this Island?

It is an absent presence — a little patch of land, stranded just off shore, that holds, compressed, the entire history of the Hudson Valley: beauty, revolution, industry, decay.

It is a mystery: no one knows exactly what to call it (Pollepel? Polypus? Bannerman?) or what has happened here.

We know that it was carved, in prehistory, by the glacier that gouged out the Hudson fjord — an accident of rock left in the middle of the trough. 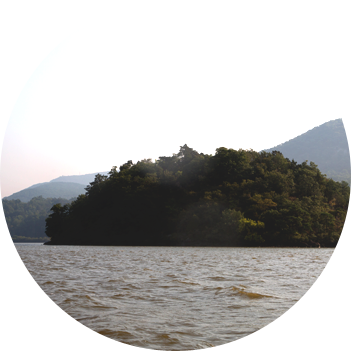 In the centuries since, the island has been used by tribes, patriots, prostitutes, fishermen, bootleggers, vandals.

In the 1600s, Dutch sailors thought of it as a threshold between good and evil. North was peace, south was danger.

During the Revolutionary War, American soldiers built an elaborate underwater wall of spikes there, to keep the British from sailing up the river — but the British sailed right through, unharmed.

At the turn of the 20th century, an eccentric arms dealer built a fantastical castle on the island and stuffed it full of armor and cannons and gunpowder. The castle's powder house exploded in 1920. Nearly 50 years later, most of the rest of the castle went too: a fire with flames 200 feet high devoured Bannerman's warehouses, lighting up the Hudson Valley, leaving only the walls we see today

All of this history, and more, is present and absent on the island.